An interlender agreement is an agreement between or among two or more lenders that stipulates and allocates the priorities between them.  In particular, it covers their priorities in the debtor’s collateral and the timing of repayment by the debtor (also known as the Borrower).

A scenario where an interlender agreement would be appropriate is shown below: 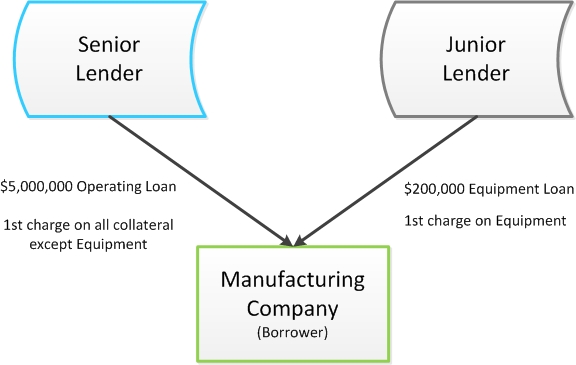 Lenders who enter into this type of agreement often have different levels of risk and exposure – typically the lender who has the larger amount of outstanding loans is referred to as the senior lender and the lender with the least is referred to as a junior or subordinate lender.  It is often the senior lender who initiates the implementation of an interlender agreement.

Three core terms are generally negotiated in an interlender agreement:

These agreements sound complicated but if you break them down into their individual elements they are much easier to understand:

: to give something more importance over another thing or so that it is done or dealt with first

: to decide that something which had been planned for a particular time will be done at a later time instead

: a state in which all activity or motion is stopped

Interlender agreements come in many forms but generally focus on the same core elements – Priority, Postponement and Standstill.  A poorly drafted interlender agreement could cause a tremendous amount of loss and damage to the Senior Lender as well as to the Borrower (e.g. unnecessary production stoppages), or unfairly handcuff the Junior Lender.

Although interlender agreements are often biased in favour of the Senior Lender, they should not be viewed as being solely for the Senior Lender’s benefit – if properly negotiated, there can also advantages and benefits for each of the Junior Lender and the Borrower.  Lenders (both Senior and Junior) should almost always consult with their legal counsel before signing an interlender agreement as there is much more to lose than to gain if it are not properly drafted!